TUA customers can now put their concerns about our environment to work through Green Power Switch, a TVA program that promotes the generation, transmission and distribution of electricity produced by renewable resources.

Wind Power: Power out of thin air - it's no magic trick. Properly placed wind turbines can generate electric power anywhere the wind blows steady and strong. Wind turbines use the momentum of moving air to quietly turn the large blades, which are attached to the shaft of an efficient electric generator. TVA's wind turbines are currently located on Buffalo Mountain in East Tennessee.

Methane Gas: There's treasure in your trash. In the start-up stage of Green Power Switch, methane gas from the Middle Point Landfill in Murfreesboro will provide the largest source of its cleaner energy. If released directly into the atmosphere, the methane that landfills emit becomes a potent greenhouse gas. But using the methane gas as fuel to power an electric generator transforms the problem into a renewable energy solution that actually helps reduce air pollution.

Solar Power: Strong enough to fry eggs from 93 million miles away, the sun is an incredibly powerful source of energy. That's why we're collecting solar power with photovoltaic panels and transforming it into usable electricity. When rays of sunshine strike a solar panel, they give some of the electrons inside it more energy, which creates an electric current. At present the amount of energy derived from solar power is small, but we plan to grow

How's this for an environmental impact!

Buying two blocks of green power each month for a year is the same as recycling 480 pounds of aluminum (15,322 cans), or 1,766 pounds of newspaper, or planting one acre of trees in the Tennessee Valley.

Making the Green Power Switch is as easy as flipping a light switch. You can buy green power in 150-kilowatt-hour blocks (about 12 percent of a typical household's monthly use). Each block you sign up to purchase will add $4 to your monthly power bill, and you can buy just one block or as many as you like. The green power you pay for will be added to TVA's electric system as part of the Valley's total power mix.

Why does green power cost more? Because while renewable resources like sunlight may be free, the technology used to capture the energy these resources produce is still more expensive than traditional power generation methods. By choosing to pay a little more for Green Power Switch, you help advance the technology and increase the amount of electricity generated from cleaner sources. In the spirit of renewability, the dollars from every block of green power you buy go directly back into Green Power Switch.

Visit our office any weekday between 7:30 a.m. and 4:30 p.m. to sign up, or print out the following application, drop it by our office, or mail it with your payment. You can learn more about green power by visiting www.greenpowerswitch.com. 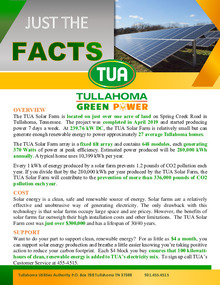 The Tullahoma Utilities Authority (TUA)  is the Tullahoma provider of Electric, Water, and Wastewater as well as Television, Internet, and Telephone through its LightTube, fiber optic division.